42% of Americans find winter to be the best sleeping season. Learn more about your sleeping preferences.

You know that your mind is sharper when you’re getting a good night’s sleep, but did you know your heart relies on good rest, too? Research suggests that your heart requires rest on a steady schedule, as snoozing for less than 7 to 9 hours per night puts your ticker at risk. That’s bad news for many people, as more than one-third of American adults don’t get enough sleep, according to the Centers for Disease Control.

And how bad are the consequences for the sleep-deprived? Well, a recent study published by the American Heart Association reveals that inconsistent sleep may lead to high blood pressure and coronary artery disease, among other heart ailments.

#DYK heart health & #sleep are linked? Do your heart a favor and check your sleep schedule today. Click to Tweet

It’s not just short sleep that hinders heart health, either. Resting for more than 9 hours per night is a problem too, because it boosts your likelihood of suffering a heart attack.

The relationship between your chest’s thumper and your night’s slumber goes both ways — just as bad sleep hurts heart health, a finicky ticker reduces your rest. People with insomnia, the feeling of being habitually sleepless, are 17% more likely to have heart failure, according to a study in the European Heart Journal. This can be confusing, though, as insomnia could be either a symptom or a cause of the heart issues.

Additionally, a report from Harvard Medical School cautions that heart disease is sometimes the reason for restlessness, as the chest’s continuous palpitations can disrupt slumber.

There’s plenty more to know about how heart health and sleep are linked, and how they’re affecting people of different genders, races and ethnicities. Did you know:

Show yourself some love and, for the sake of your heart, get quality rest regularly

If your sleep or your heart ever give you trouble, consult with a medical expert. You want that heart to pound at a perfect pace for years to come. Decide what you like and don't like before buying a mattress when you take our Better Bed Quizzz.

Get Better in Bed 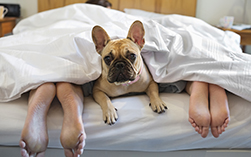 Sign up now for The Snoozzze: news you can sleep on. Learn about sleep tips, the latest sleep research and more!

All About the Bed

You’ll spend 26+ years in your lifetime on your mattress.

Here’s how to make it a little bit more comfy.

Restful nights can be in your future with these ideas and advice.

Before buying a mattress